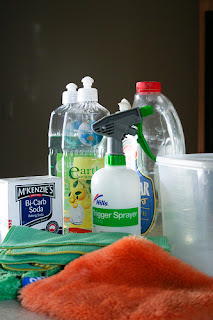 We'd like to invite our co-op members to come this Sunday and help us tidy and clean our studio in preparation for the upcoming classes and for the summer.  The doors will open at 9am and will continue till at least 3pm.  You do not have to come for the entire time. Some refreshments provided.

If you're a former student looking for any of your pieces, unglazed student pieces have been packed up in boxes and are being temporarily stored in the basement to give people more time to retrieve them.  Student recently glazed and fired pieces from the previous class are still on the shelves.   If you've got cleaning fever and would like to help, we'd love to have you.
Posted by Lisa at 11:18 PM 2 comments:

Some Openings in Upcoming Classes

This workshop is open to members and non-members.  Please phone the studio (892-2701) on Wed eve or Sun morning to put your name down or reply to this blog posting.  A few details, including costs, are grant dependant, but we will update this post when we know more information.  The information below was provided by Liz Demerson. 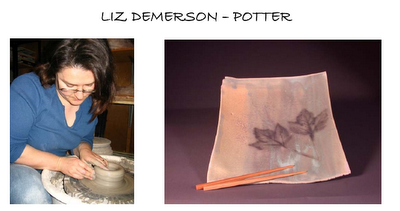 Before pottery was in Liz Demerson's life, she received a Bachelor of Arts from the of in 1998 and a Master of Arts from in 2001; both in Socio-Cultural Anthropology.


Liz Demerson graduated from the New Brunswick College of Craft and Design in 2003 with a Diploma in Fine Craft. She has been creating pottery in her own studio and worked as technician and teaching assistant at NBCCD for four subsequent years. Juried into the New Brunswick Crafts Council in 2004, she began attending craft sales in and .  In 2005 she began to supply pottery for the wholesale market through attending the Atlantic Craft Trade Show.  In 2006, she attended the One of A Kind sale in .   She ran a pottery studio and craft store at Kings Landing Historical Settlement in 2005 and 2006.
Liz has been teaching pottery since graduating from the College as a teaching assistant, and began to teach privately in 2005.  After obtaining a teaching degree from the in 2009, and having a baby in 2008, she has been teaching Art in the public school system as a substitute, and has since begun teaching pottery at the NBCCD.  Even while working on her teaching degree, substituting and raising her daughter, pottery has always been on Liz's agenda and has continued to sell her work at craft sales and to a few wholesalers around the Martimes.
Functional ware has always been Liz's main interest. She loves the thought that the pieces she creates are used daily as a favourite mug or bowl. Her influences are mostly from contemporary sources; high fired porcelain pieces and minimalism in decorating.  She uses both thrown and handbuilding techniques to create two distinct lines. Recently she has begun to experiment in combining the two techniques to create larger more dramatic forms.
Workshop Itinerary - Details provided by Liz Demerson


Friday Evening - 2 hours: Introduction, slide show and discussion of my work and influences.
(I will bring a memory stick with my pictures on it)
Saturday 9am-12: Rolling out slabs of clay, texturing the clay, stretching the textures (15-20 mins) Will Need: White Stoneware Clay
Saturday 1-4pm:
Sunday: 9am-12: Assembling the bottle and teapot forms, and large platter. Throw foot and spout, pull handle. (1.5 -2 hours)
Posted by Lisa at 12:16 PM No comments:

Email ThisBlogThis!Share to TwitterShare to FacebookShare to Pinterest
Labels: workshop

First notice of an upcoming workshop.  Details are still being worked out and are subject to change.

Liz Demerson (New Brunswick potter, instructor at the New Brunswick College of Craft and Design, Facebook page link here) will be teaching a handbuilding weekend workshop the weekend of April 29th to May 1st.  The Friday evening session will be mostly social with the instructional sessions happening on Sat & Sun.  Costs to be determined but it is running on a non-profit basis.

Maximum of 10 people and open to members and non-members.  Signup on the whiteboard in the studio with an official registration/payment soon.
Posted by Lisa at 11:12 AM No comments: